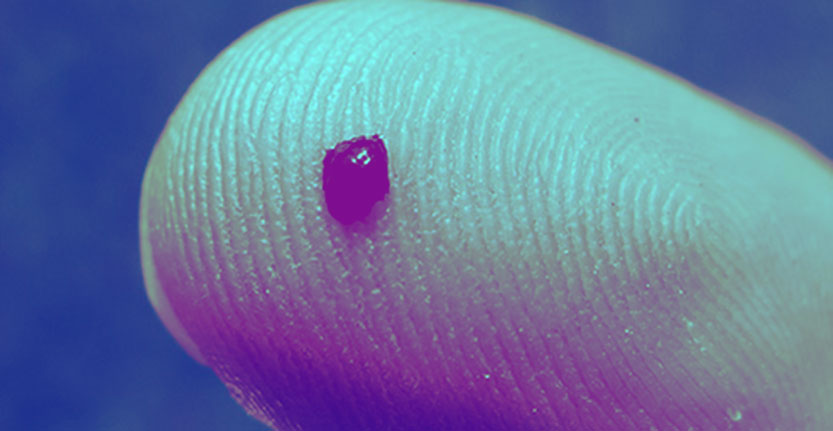 Stopping bleeding from wounds with gallium

Gallium nitrate is a mineral in liquid form approved for use in the treatment of hypercalcemia (a blood condition when calcium levels are too high) in cancer patients. Nearly 10 years of close observation had demonstrated the effectiveness of its topical form for successful pain relief in cancer patients with painful bone metastases. I was intrigued by these results and as I was experimenting with various concentrations and dilution methods I had many bottles of gallium around my lab.

One day I cut my thumb very badly while attempting to lift the cover of a can of tuna. The cut was very deep and bleeding profusely. Being the curious experimenter type and wanting to avoid a trip to the emergency room for stitches, I instinctively turned to the bottle of gallium I had on my desk. Recalling some reported side effects of skin dryness from its topical use by patients, I wondered if  gallium may be useful in stopping the bleeding?

I poured some gallium into a cup and placed my finger in it. Instantly the blood started to coagulate, turned brown, and the pain stopped. As I knew that gallium had well-known anti-infective properties as well as wound-healing properties, I kept the finger submerged for about 5 – 10 minutes. The wound appeared to have closed and the process saved me a trip to the ER. The pain had been totally relieved and I dressed it with a plain bandage.

From then on, whenever anyone in my family sustained a serious cut I immediately applied gallium to great effect. One time my daughter fell sustaining a deep gash in her forehead which bled profusely. I applied a gallium-moistened gauze and the bleeding stopped. I then took her to a doctor who became very annoyed. He demanded to know what I had done because he had had to work hard to scrape off the clotted blood in order to be able to clean the wound. Its effectiveness as a coagulant made me realize that gallium had some exciting potential to explore.

In order to accurately measure gallium’s effects, a physician friend and I volunteered as experimental subjects. This physician, a surgeon, used a scalpel to create two cuts on his forearm and on mine. We then applied gallium to one of the wounds on each of us and used a stopwatch to time how quickly the bleeding stopped. We noted a significant reduction of bleeding time by 75%. We published these findings in a medical journal 2011 1.

How does it Work?

The reduction in bleeding time was exciting, but we still needed to understand how gallium was achieving this effect. This blood clotting property had never been reported previously in the literature. At that time I was working on other projects with my colleagues at the Hospital of Lille, France, and I asked if they could perform some lab testing to uncover the mechanism of action.

The first call I received from the researcher in France was very exciting. “It turns blood into butter”, she said, but still didn’t have any information on the mechanism. Her next report was very subdued. She had performed specialized testing and found that gallium didn’t have any effect on coagulation. To the contrary, it may even have inhibited it.

In fact, this was exciting news as I knew that a serious drawback of other hemostasis products on the market was their ability to cause internal clotting if they were absorbed into the bloodstream. Could we have stumbled onto a solution that avoided this great risk? Our experiments continued and we finally established that while gallium does not inhibit coagulation directly, it leads to flocculation of a blood clotting protein known as fibrinogen. The separated fibrinogen (a blood-clotting protein) gathers and forms a clot leading to the cessation of bleeding in external wounds. The results of our research were finally published in 2013 in the journal BioMetals 2.

However, another interesting story happened during the testing process. The tests in France were being performed on the spare blood of patients who had been subjected to routine blood tests. One day there was no spare blood in the lab, so one of the researchers volunteered to draw blood for our experiments. Part of the experimental process involved testing for fibrinogen levels before and after the addition of gallium. Surprisingly, this researcher’s pre-gallium fibrinogen level was found to be extremely high.

Elevated fibrinogen is a nonspecific marker for various diseases and an extremely high level usually reflects the presence of a serious condition. This researcher was immediately subjected to a whole-body CT scan which found a 4 cm stomach tumor. One of the other team members, a surgeon, operated and removed it. The pathology showed it to be Castleman’s disease, a rare cancer-like condition.

We had inadvertently discovered that elevated fibrinogen was a way to diagnose Castleman’s disease even before it had spread – something that had never previously been known. This case report was published in the Journal of Clinical and Experimental Hematopathology in 2014 3.