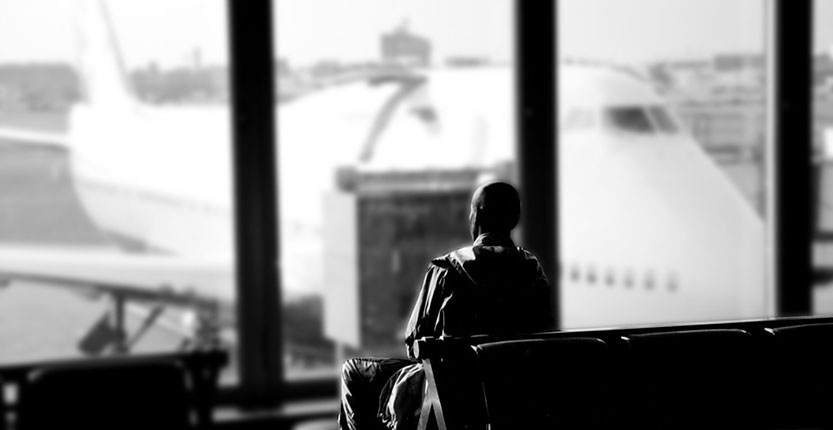 I recently flew from Vienna to New York on Austrian Airlines. As sometimes happens after landing, a number of passengers were impatient and stood before the plane arrived at the gate. I was impressed with how the chief flight attendant handled the situation. He grabbed the microphone and announced, “Ladies and gentlemen, in the history of aviation no passenger has ever arrived at the terminal before his aircraft did. Please take your seats.” There was widespread laughter, and a dangerous situation was skillfully defused.

By nature, many of us—especially those known as “Type A” personalities—tend to be impatient. The word “patient,” in its noun form, denotes a person who is under medical care or treatment. In its adjective form, it describes the virtue of bearing suffering and hardship without complaint. When medical professionals use this adjective, perhaps it reflects the expectation of forbearance that the medical system expects from the consumers of its services. Yet there are times when patience is highly risky and can lead to deadly results.

Recently, I became involved with advising a 24-year-old woman who is battling a recurrent and deadly brain tumor. Sparing no effort, her family has sought the very best medical expertise. These efforts have culminated in her joining a clinical trial at one of the most prestigious cancer centers in New York.

Clinical trials are a necessary evil. One of their evils is that they preclude the patient from pursuing concurrent treatment options, as doing so would invalidate the trial’s conclusions. Although this valid restriction serves the needs of science and drug-developers, it is frequently against the patient’s best interest. This matter has been eloquently discussed by the late Dr. David Horrobin. A controversial physician and author of over 500 papers in the medical literature, his last paper, published in The Lancet just weeks before he died, publicly acknowledged that the interests of clinical trials were far from aligned with his interests as a patient. In this paper, he describes his experience as a cancer patient:
“And so I entered a universe parallel to the one in which I had lived for 40 years. I became a patient and suddenly saw everything from the other side…. I developed a whole new attitude to clinical trials and experimental treatments…. I also learned from my fellow patients that the real consequences of this situation were rarely spelled out to those volunteering for such trials in terms they could understand. I thought long and hard about this situation and came to the conclusion that, as presently organized, many oncology trials are unethical.”

Thirteen years have passed since Dr. Horrobin wrote these words, and it seems that little has changed. Last week I participated in a closed conference with some of the world’s most famous oncologists who treat brain tumors. In response to a proposal I made, one of the senior physicians shocked me with his response. He unequivocally stated that there has not been one trial in glioblastoma (an aggressive type of brain tumor) where the outcome of the treated group was better than that of the control group. When I asked him to explain why, he boiled it down to the inherent toxicity of all the treatment drugs.

Perhaps I am naive in hoping that this expert’s statement, which went unchallenged by his colleagues, is not a universal rule. What baffles me, though, is how so many physicians recruit patients into trials without explaining that based on past experience, there is a greater chance of losing than gaining by joining the trial.

So how are patients recruited into trials? Here, industry relies on the persuasive skills of the physicians that entice their patients to join trials. The physicians often tell their patients that every effort will be made to get them into the trial. What sounds hard to get also sounds valuable.

Have you ever heard a physician say that a trial failed the patient? No. It’s always the patient who fails the trial or the treatment.

Back to the young lady with the brain tumor. Her tumor continues to grow, and the MRI reports confirm this in no uncertain terms. Her physical state continues to deteriorate and she displays all the classic signs of progressive disease. Her physician who recruited her to the trial urges her to be patient. According to her physician, this trial drug, whose benefit is completely unproven for brain tumors, requires a lot of patience before results are seen. Her physician postulates that the worsening radiological picture may, in fact, be interpreted as a positive inflammatory response induced by the trial drug. Her symptoms are also interpreted to be only “side effects” of this “promising” trial drug.

All this may be true and more than wishful thinking, but is it ethical to prevent the patient from pursuing concurrent treatment options when the stakes are so high? Of course, these options are incompatible with the drug trial, but the patient is not fully informed that in all probability, she has agreed to donate her body to science. There is no certainty with any other treatment options, but being precluded from pursuing these options, she may never get a second chance.

There is a joke in Yiddish that translates approximately as follows: A patient visits his physician, obtains and fills a prescription, and promptly disposes of the drugs. His friend watches incredulously and asks for an explanation. “It’s very simple,” the patient replies. “The doctor needs to live [make a living], so I visit him. The pharmacist needs to live, so I visit him. And I need to live, so I toss the drugs.” This is an example of distrust taken to its extreme, yet it would be prudent for patients to adopt a skeptical attitude toward the advice they receive from physicians, especially when they might not get a second chance if the advice proves to be ineffective or even incorrect.

Besides the ingrained deference to authority of expertise, other factors motivate “patient” behavior that is so risky to patients. Hanna, a mid-aged and highly intelligent hospital nurse and mother to several young children suffered from incurable lymphoma. She had “failed” all the chemotherapy treatments and there was nothing else to offer her, not even a clinical trial. She had learned of some research I was involved with pertaining to using an over-the-counter cough medication for its anti-cancer effects. She called me to discuss the dosage and possible risks, and I shared the information I had. She discussed it with her oncologist and he declined to support its use. Then, while her disease was progressing, Hanna spent close to three months, patiently hoping that her oncologist would change his mind and approve of her using this over-the-counter cough medicine.

One day Hanna called me. “I’ve been stupid,” she said. “This drug is safe and I have nothing to lose by trying it—I’ve lost three months by not trying it!”

I was pleasantly surprised by Hanna’s conclusion. It is not often that I see such a change in obstinacy, and I was encouraged. But then Hanna shocked me. “I’d like you to know that I’m only willing to take this drug because my oncologist told me there’s nothing further he can offer me. However, if he says I have to go back to chemotherapy, I’d rather die than offend my doctor.”

“I’d rather die than offend my doctor”

Hanna began taking the cough medication, and, incredulously, the main marker of her disease, her LDH levels in blood, dropped by over 80%! Her oncologist was excited by the results, but for a different reason than I was. “Wow!” he exclaimed to Hanna. “Now that your LDH has dropped so much, you’re eligible for chemotherapy again and we can pursue a bone marrow transplant.” True to her word, Hanna started intense chemotherapy prior to the bone marrow transplant. She “failed” the chemotherapy and died, maintaining one success until the end: She didn’t offend her doctor.

Perhaps surprisingly, I admire Hanna and I frequently share her story with others. I cannot judge her for her choice, at putting her relationship with her doctor before her best interests, and for putting her doctor before her children. Anyone who has been hospitalized will realize how difficult it is to argue with a physician or refuse to accept a doctor’s directives and advice. I admire Hanna for something completely different. She was sufficiently cognizant and honest when she admitted the motivation behind her decision.

Have you ever wondered why some patients research their physician’s reputation, but no one seems concerned about the reputation of their airline pilot? It’s largely because the pilot is flying on the same flight. Next time you are asked to “be patient,” don’t do it blindly or out of deference for authority. It’s your life at stake, and your physician isn’t on the same flight that you are. To avoid the risk of a crash-landing, you must be prepared to take bold and decisive action.

Curiosity – The Indispensable Factor for a Good Physician

In Experts We Trust